The IU women’s basketball team will postpone their game on Wednesday and now Sunday as well. 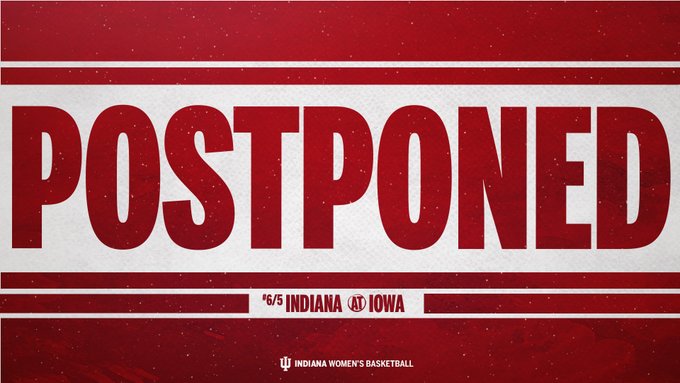 In an announcement on IUHoosiers.com, IU Athletics reported that “due to COVID-19 protocols within the Indiana program, the game between Indiana and Michigan State on Wednesday, January 19 has been postponed.”

The programs will work with the Big Ten Conference to try and find a reschedule date.

Ticket holders will be notified by the ticket office with additional details.

Last year the Big Ten amended their forfeiture policies related to the pandemic.  The conference will work with the schools to find a date to play the game.  If the game cannot be rescheduled, then a “no contest” would be recorded for both teams.

This is the third game this season impacted by the virus.  A December 21 game against Wright State was cancelled became of COVID on the opposing team, and the December 30 game at Rutgers was postponed.

The IU women’s team was coming off an overtime win at Purdue on Sunday, 73-68.

In a social media post, JB’s Salvage reported that a fire occurred at their salvage yard on Fountain Drive.  No buildings or working vehicles were damaged, according to the post.

Surveillance cameras showed a few juveniles vandalizing cars in the parts yard, who then fled once the fire began.

No injuries were reported.

Many people used Monday as a “day on, not a day off” to honor Martin Luther King, Jr.

Others marked January 17 as the 100th birthday of Hollywood legend Betty White.  The Emmy-winning actress passed away December 31, just days before hitting the century mark.

Fans on social media followed the #BettyWhiteChallenge, encouraging contributions to local animal shelters in honor of the Golden Girl.

A documentary – Betty White: A Celebration – showed in theaters across the country as well.

White began her career in television in 1939 on experimental television.  She appeared on television and film for more than 70 years – most recently as the voice of “Bitey White” in the 2019 animated film “Toy Story 4.”